In the land of Facebook Ads, there are two ways to set your budgets.

One is at the ad set level, which allows you to set a budget for each ad set within a given campaign.

Campaign Budget Optimization, on the other hand, is a (relatively) new Facebook advertising feature that allows you to set a daily budget for an entire campaign rather than setting budgets for each ad set.

To dive deeper, Campaign Budget Optimization utilizes Facebook’s algorithm to distribute your budget across ad sets where they are most likely to get conversions for the best price.

Instead of maintaining a constant spend per each ad set, Facebook will pool the budget into the ad sets that are most likely to get results on any given day.

Why is CBO such a big deal? Why do Ads Managers need to master this tactic sooner rather than later?

While this may seem like a minor change at face value, using Facebook CBO requires new tactics as well as new strategies in order to be profitable. For more on this, you’ll also want to build a bulletproof Facebook retargeting funnel.

So where do you start?

Before diving into advanced tactics, let’s begin with the mechanics of how to set up a CBO campaign.

How to Set Up Your First Facebook CBO Campaign

The first thing you’ll do when setting up a new campaign is choose your objective. In the example below, we’ve chosen the Conversions objective. After you select your objective, you’ll have the option to choose Campaign Budget Optimization before moving on to ad set creation.

Once you flip Facebook CBO on (to optimize budget across ad sets), you’ll be able to input your daily budget and select your bidding strategy. 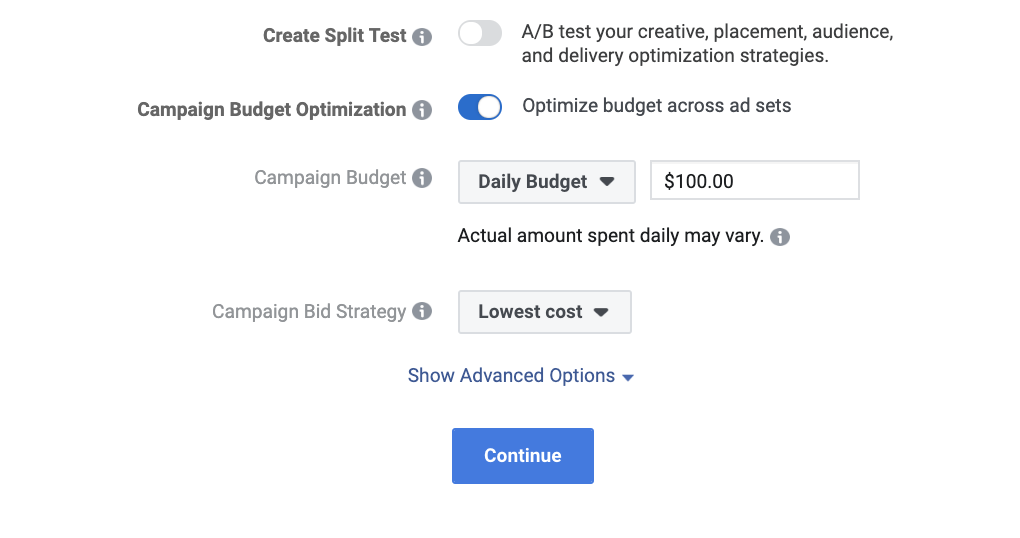 Facebook automatically selects the “lowest cost” bidding strategy, but there are three additional strategies you’ll be able to choose from:

There are also a few advanced options to choose from at the ad set level. They include ad scheduling and delivery type. 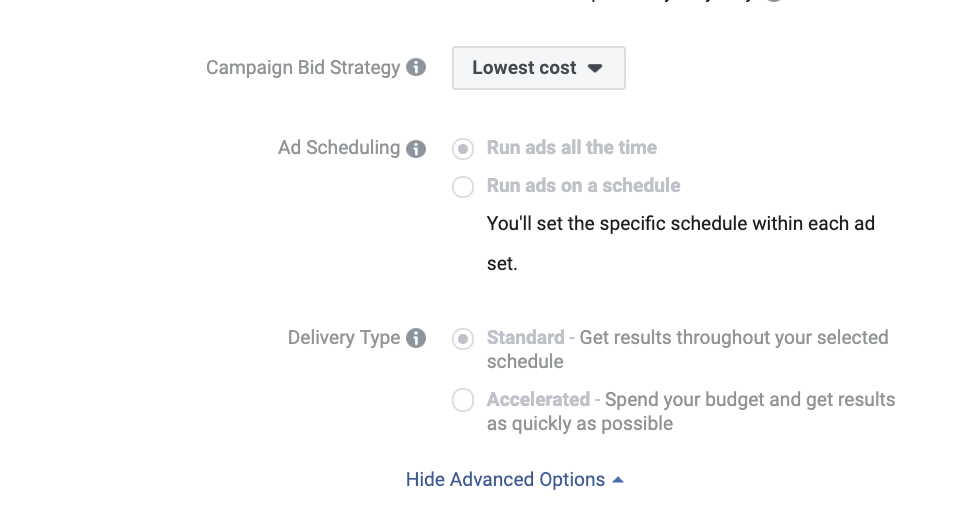 Facebook CBO vs Ad Set Budgets: Which One Should You Choose?

As of the writing of this article, you still have the option to choose between campaign budgets and ad set budgets. What does that actually mean when running an account? And most importantly, when should you choose Campaign Budget Optimization or ad set budgeting?

While it’s important to test, test, TEST, we’ve found that there are two main rules of thumb for when each of the respective tactics works best.

We hesitate to sing its praises knowing it won’t always be an option, but we do commonly find ad set budgeting to be the most effective strategy when testing new audiences. This is likely because it guarantees your budget will deliver impressions to people within a certain amount of time.

Good news: If this paragraph is live, THERE IS STILL TIME.

Rule #2: Use CBO for Tested Ad Sets That Are Ready to Scale

Once you’ve run plenty of tests and have determined what your best performing ad sets are, placing your successful ad sets into a CBO campaign is a best practice to use, as well as an extremely effective strategy for scaling.

We’ve tested a variety of ways to scale campaigns using CBO. There are two strategies that tend to show the strongest results:

Both of these structures are outlined in the section below, along with two other structures you can (and should) test out.

Facebook CBO Campaign Structures That Have Worked for Us

We’ve ironed out best practices for four CBO campaign structures that all Facebook advertisers should test:

Which structure you should use depends on your objectives and budgets. And as always…if one doesn’t work, test a new one.

This is a great place to start if you’re new to Facebook CBO.

When using this structure:

That’s it. No interest targeting, or lookalike audience layering. The total number of ad sets in this CBO campaign is two.

The idea is that if you’re getting at least 50 conversions within one week, your Facebook Pixel will actually train your broad audience ad set to find your customers.

This allows the algorithm to do the dirty work.

Bottom line, Fetch & Funnel found this structure to be most successful when you have a budget large enough to acquire at least 50 conversions within one week.

So what do you do if your budget isn’t large enough to train the pixel?

Simple. Put all your best performing ad sets into one CBO campaign.

Start with 5-10 of your best performing sets. You can use fewer if you have to. The most important thing is that they perform well for you. 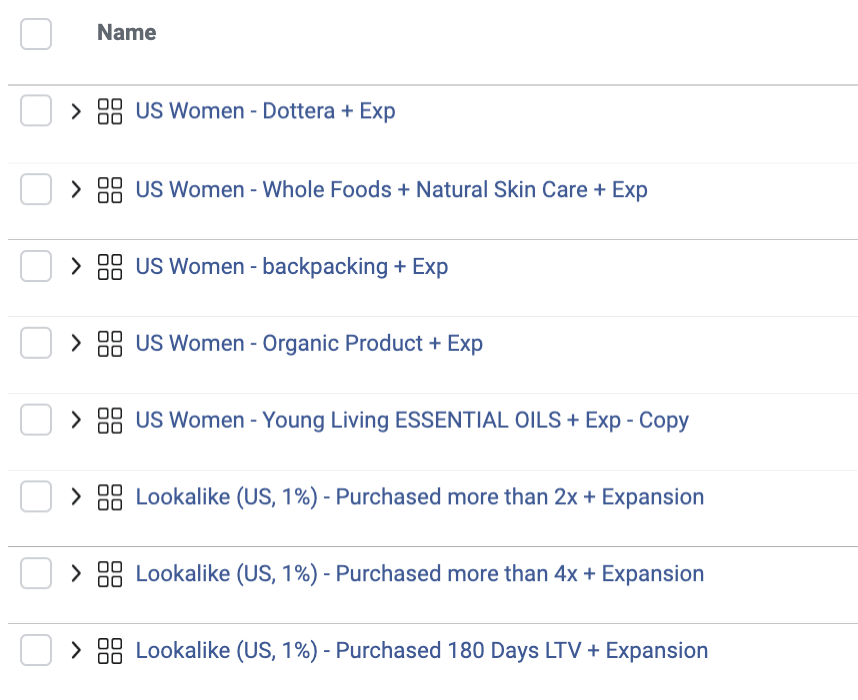 We’ve found a lot of success with this structure, especially when scaling campaigns. What we like about it is that you can clearly tell which ad sets continue to drive results and then simply turn off ad sets that stop performing.

People who were fond of the Michigan Method will probably like this structure as well, because it gives the marketer more control over which audiences Facebook targets.

With this particular structure, it’s probably best to begin with the image. 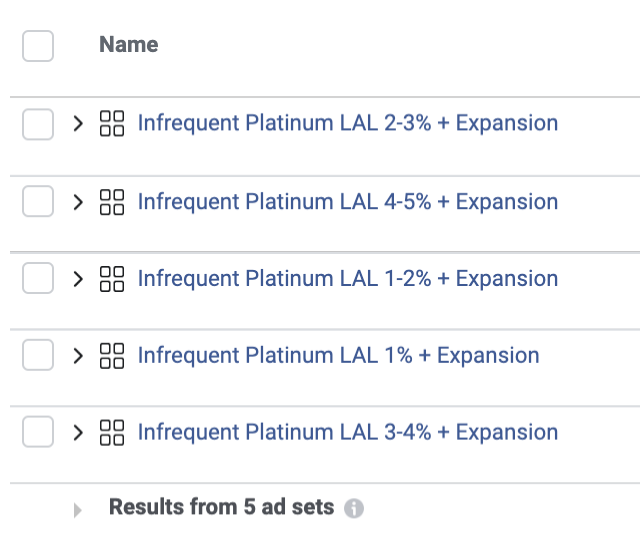 We’ve tested this structure with up to 10 ad sets, but have found the most success by limiting to 5. Test more at your own risk.

When setting up this structure, be sure to exclude each of the audiences from each other in order to avoid audience overlap. So the 1% lookalike audience will be excluded from the 1-2%, 2-3%, 3-4%, and the 4-5% lookalikes… and so on for each ad set.

Though setup is a bit complex, it can provide sweet returns if it works for your business. We recommend trying it out, especially if you’ve had trouble prospecting beyond one lookalike audience.

If you’re able to get the recommended number of conversions through your pixel each week, give this bad boy a try. It’s the ultimate scaling campaign and it is very effective for conversion to purchase and lead generation campaigns.

To create this structure, you split up all your best tested audiences into two ad sets—one for interests and one for lookalikes—which are often called “Super Groups.” Then you create a third ad set made up of a broad demographic group in order to allow the algorithm to do its thing. 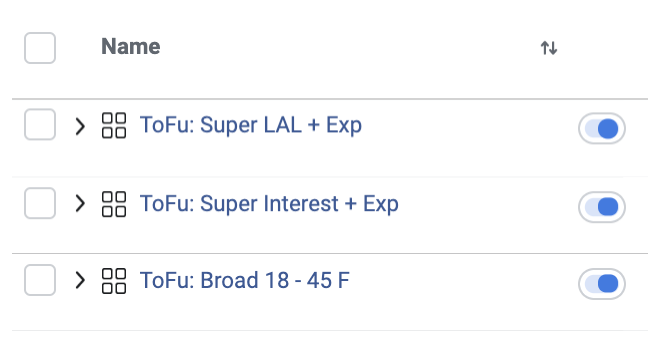 This campaign tends to perform very well because each of the audiences has already been tested. And it utilizes both lookalike and interest targeting to guide the broad audience ad set.

We like to set this one up with a testing campaign using the structure outlined in the next section.

We test both lookalikes and interests in the same campaign. Once the ad set has been tested and has results that meet your desired goals, we add that lookalike or interest to one of the two super ad sets.

This keeps the audience fresh and expanding in a safe and guided way.

Facebook says that in the not-too-distant future all budgets will have to be set at the campaign level. This means that the option of testing different ad sets using ad set level budgets will be a thing of the past.

So how do you scale Facebook ads, with a testing campaign, using CBO?

First, create a new CBO campaign and segment out the ad sets with the different variables you want to test. 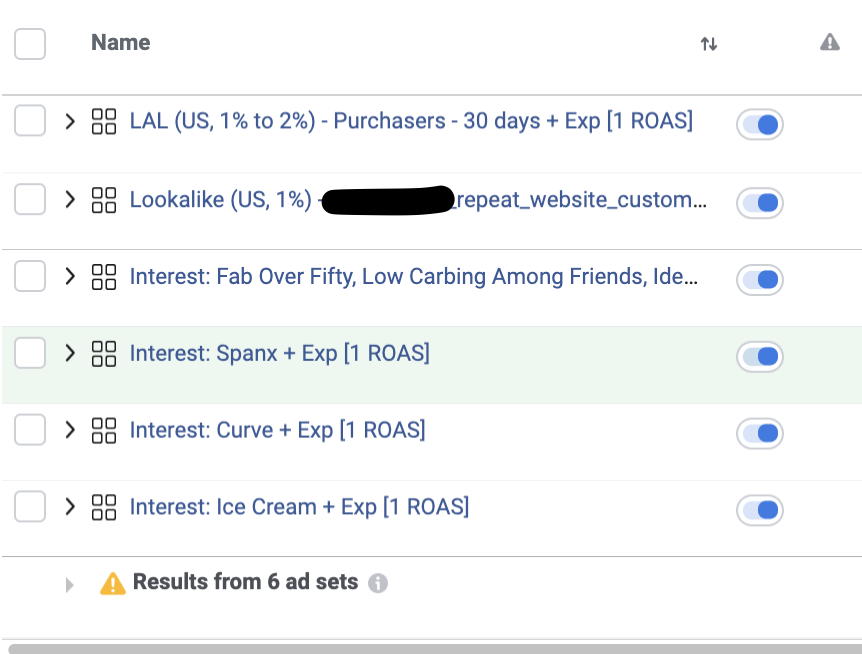 A common problem that we’ve encountered when using CBO for testing campaigns:

The budget will pool into one or two of the best performing ad sets, not leaving enough budget for the other remaining ad sets for testing.

If you notice this happening in your campaigns, we recommend setting a minimum budget to mitigate the problem. 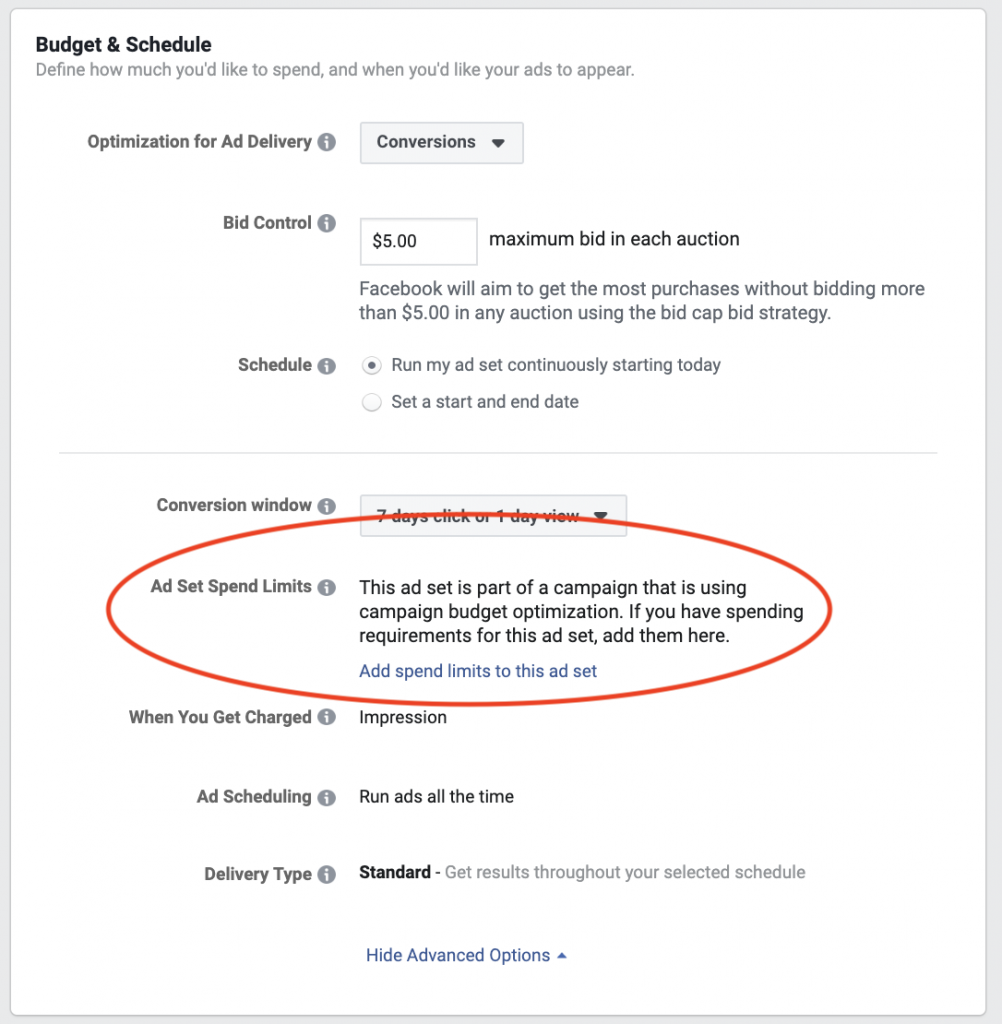 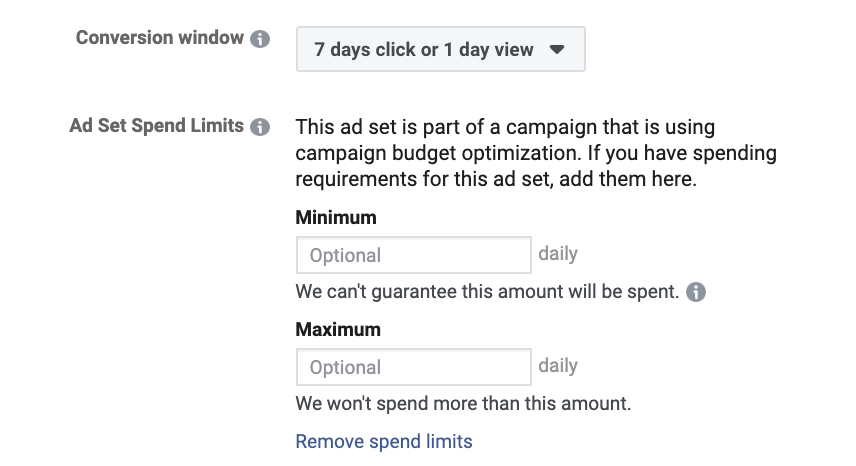 In our campaigns, we typically set the minimum spend to what our daily budget would have been if we were using ad budgeting.

Looking Forward: Facebook CBO is a fantastic way to get great results, and it will make it easier to test and scale your ad campaigns.

We’ve seen continued success from CBO campaigns with audiences that have had proven results and are ready to scale.

But we’ve also seen these results drop off much more quickly than with ad set budgeting due to ad fatigue or audience exhaustion.

Despite these mixed results, it really just depends on how the rest of your account is set up. There’s are very clear wins from using campaign budget optimization. But the real key to success on Facebook is to constantly test new tactics, strategies, and assumptions. 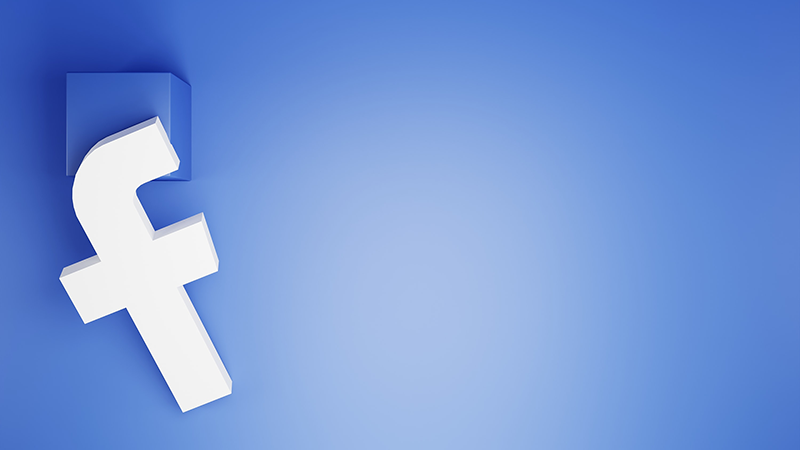 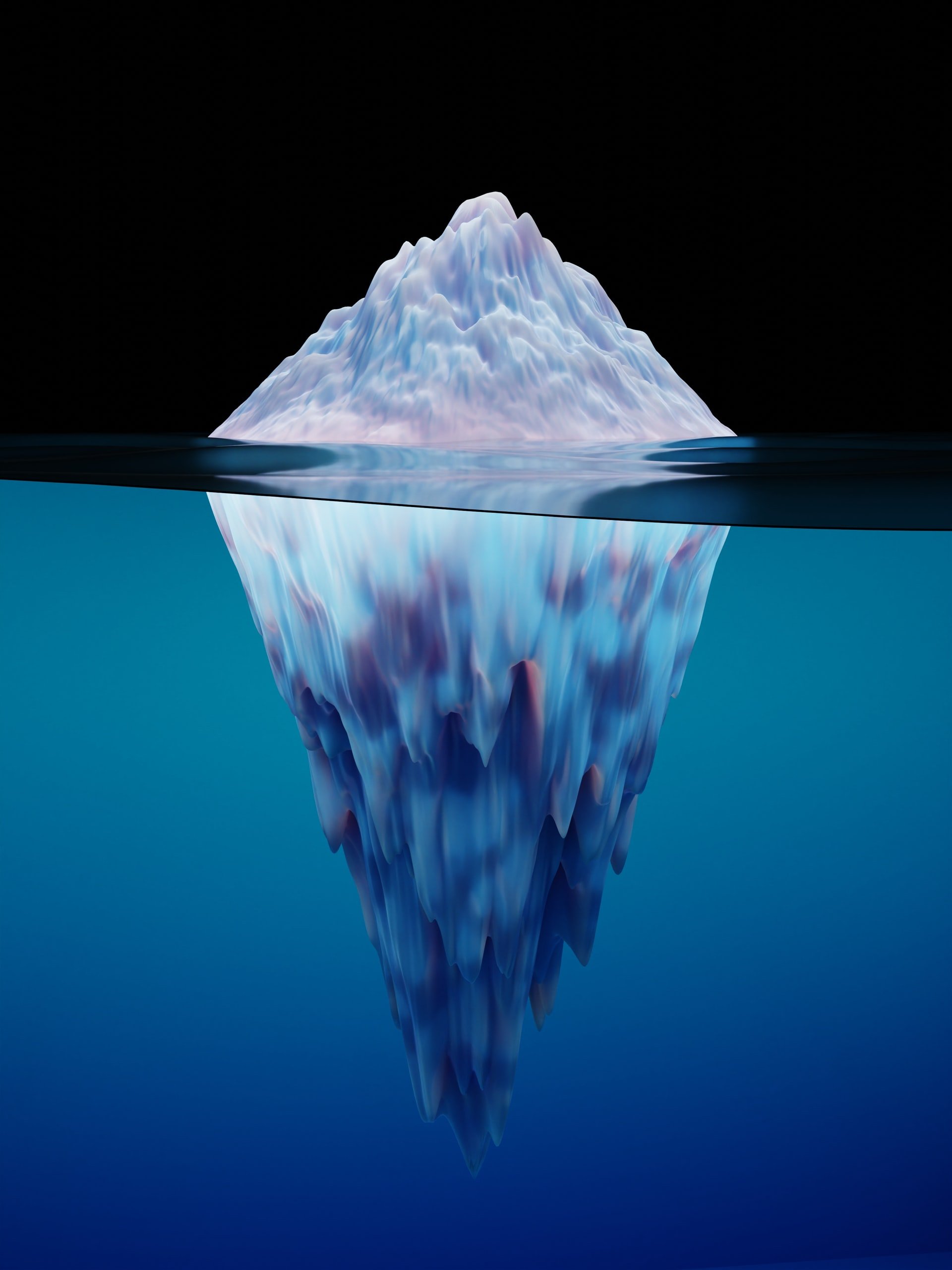 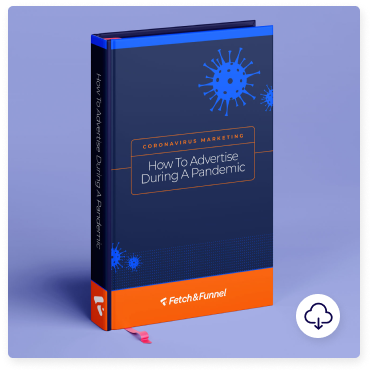 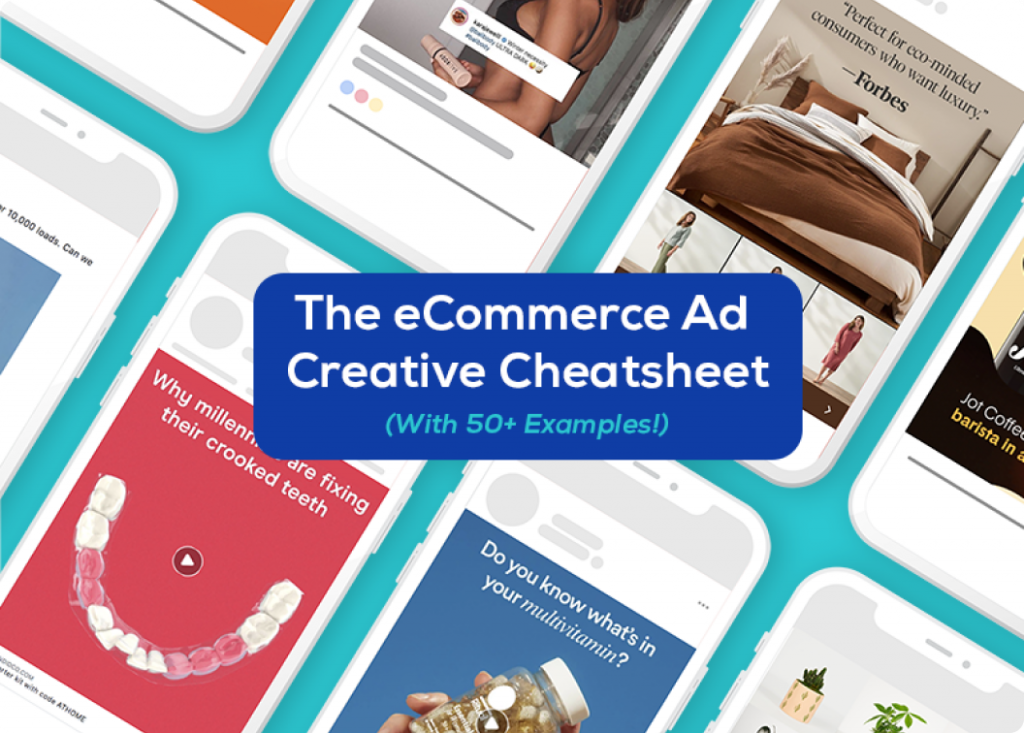 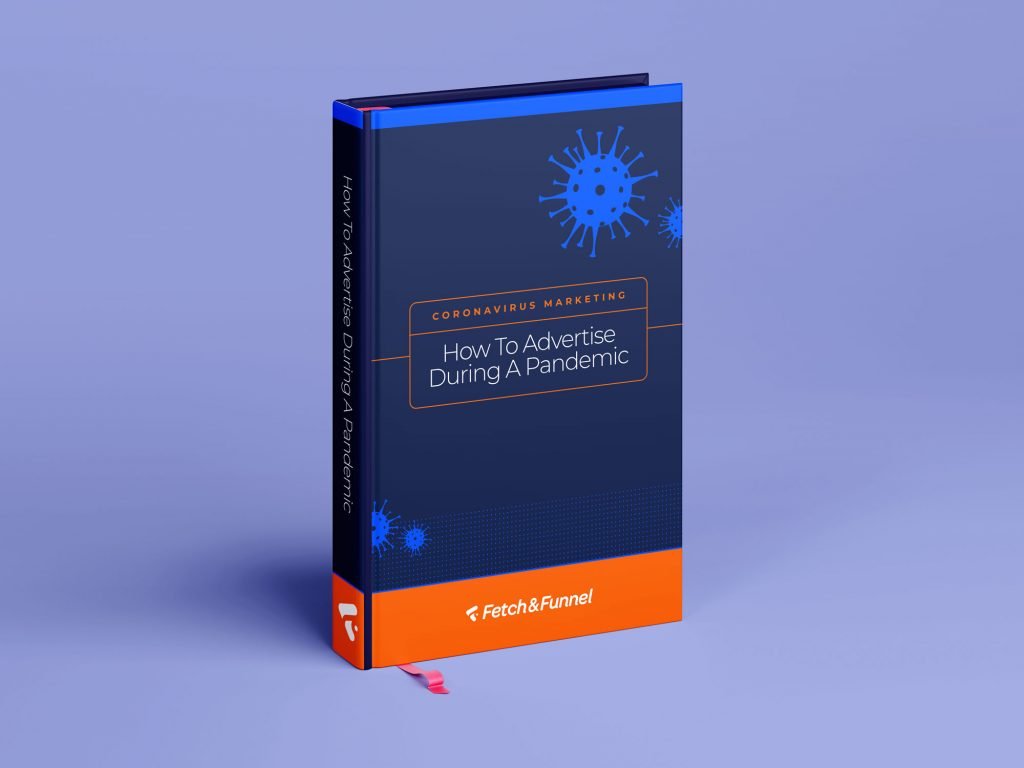 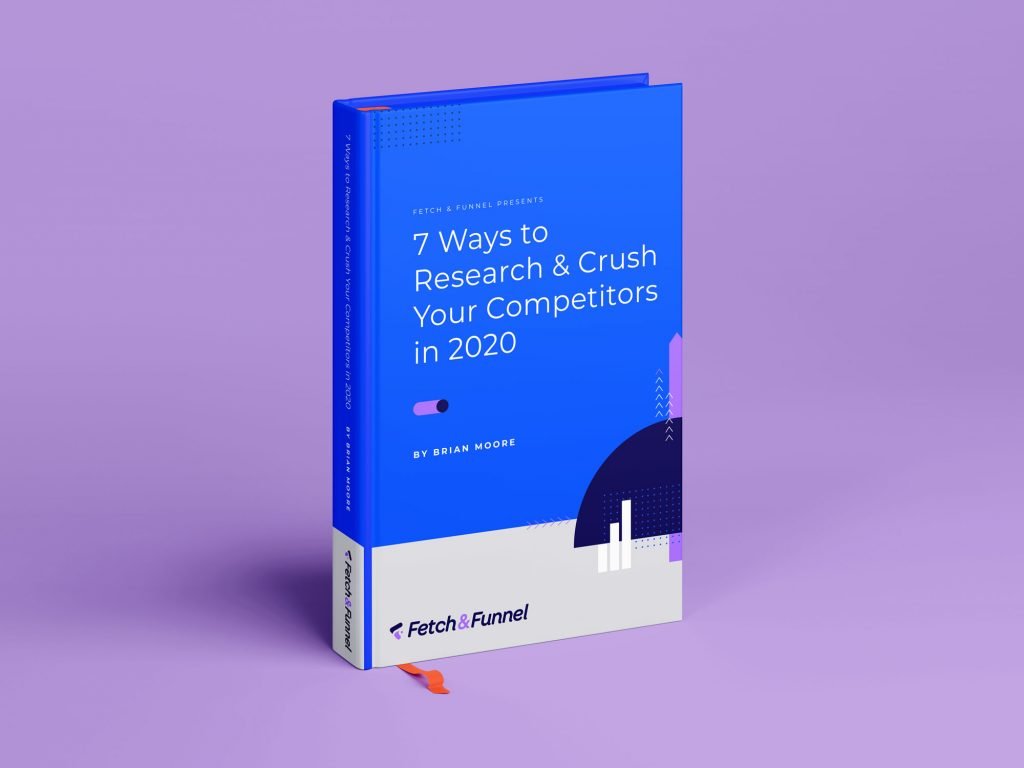