Read This Before You Try Google’s Smart Shopping Campaigns

Can we trust Google A.I. to get the best possible results? We decided to put Smart Shopping to the test.

We aren’t big fans of auto bidding, broad match, ad rotation, smart campaigns, maximize conversions, pretty much any of Google’s “recommendations,” and don’t even get us started on Adwords Express.

To be clear, an algorithm didn’t steal our lunch money in high school. We don’t have a personal beef with automation. When Google announced Smart Shopping in May 2018, the Fetch & Funnel team was excited.

We want to improve results and demonstrate success. It would honestly make our lives easier. Anything we can do to improve campaign performance is welcome with open arms.

However, we always test Google’s new auto/enhanced/A.I.-driven features and outcomes generally fall short of expectation. We’re almost always able to produce superior results with manual optimization. Manual bidding, single keyword ad groups, bid stacking (and the list goes on) all generally perform better than their automated counterparts. To Google’s credit, it takes them about a year to iron out the kinks and improve the product post-launch.

But we still hold out hope for every new feature Google rolls out. They have some of the most advanced machine learning and A.I. capabilities in the world. Have you seen the future of Google Assistant? Hey Google, order my favorite Thai food! With that in mind, it doesn’t seem too far-fetched to think that Smart Shopping campaigns could be the new exception to our anti-automation rule.

So, without further ado, here’s an honest review from the team at Fetch & Funnel.

What is Google Smart Shopping? How Does It Work?

Bids and placements are also automatically adjusted based on the determined likelihood that an ad click will result in the advertiser’s stated goal. It’s sort of like optimizing for conversions on Facebook.

Smart Shopping ads run on multiple networks, not only Search. Placements will be shown on Display, Shopping, YouTube and Gmail networks. Unfortunately, you can’t break network placements out for reporting purposes, nor can you decide to exclude any particular network. That’s a big downside—but we’ll get to that in a bit.

Although Smart Shopping Campaigns sound foolproof in theory, there are plenty of limitations you should be aware of.

One thing is certain, when activating Smart Shopping you will lose control, and place your faith in the hands of Google’s A.I.

Despite the drawbacks above, there are some compelling reasons to use Smart Shopping. They’re incredibly easy to set up and can save you a lot of time. If you’re able to set up a Shopping Feed, Smart Shopping is the easiest way to get started in Google’s ecosystem for any eCommerce brand.

Whereas traditional shopping campaigns can be overly complex. Breaking out your product catalog, grouping and structuring your campaigns, bidding, location targeting, exclusions, negative keywords (immensely important). This is highly complex advertising that can quickly overwhelm even the most seasoned PPC manager.

As with all Google innovations, you’ll have to test and apply best practices to see how they perform.

How to Set up Smart Shopping in Shopify

Google is also teaming up with third-party e-commerce platforms to make it even easier to get started with advertising. If you’re on Shopify, you can set up Smart Shopping from within the Shopify platform. It’s really easy to set up and you don’t need to start with a large budget. You can sync your products, run a Smart Shopping campaign, and track results — all from Shopify.

To set it up, first head over to the Shopify App Store and install the official Google Shopping plugin.

Then configure your Google Shopping Settings and be sure to connect your Google Ads account and go through the Google Ads checklist. Don’t forget to set up billing from within your advertising account as well! 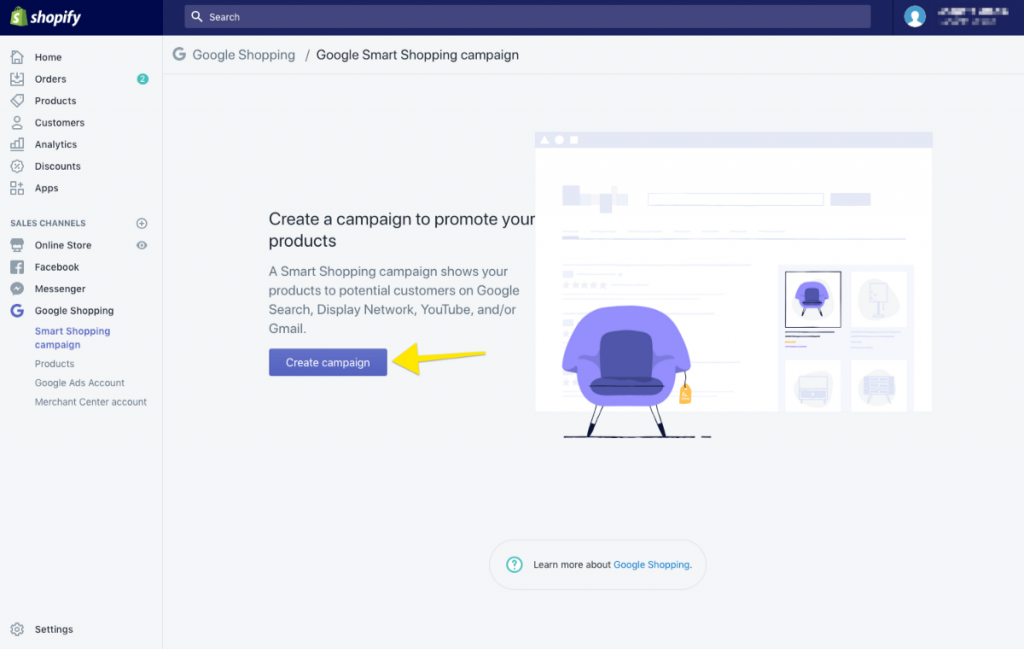 Next up, set your daily Campaign Budget and hit “Save”:

And now you’re all set!

Conclusion: Is Smart Shopping Right for Your Business?

When it comes to performance data, our results are a mixed bag. We’re continually testing new Smart Shopping campaigns across a wide variety of industries, but at present the ability to generate significantly improved results just isn’t there.

We experienced pros and cons, but overall results weren’t all that impressive. Sometimes performance declined, and other times we saw healthy improvements in comparison to existing Shopping and Dynamic Remarketing campaigns. Smart Shopping went live in May 2018, and although it’s been about a year since they launched performance doesn’t seem to be improving. At this point it doesn’t look like they will be able to consistently outperform regular Shopping campaigns, and unless automation is your only option we recommend not using Smart Shopping.

Keep in mind traditional Shopping campaigns are often the most profitable area on Google for e-commerce businesses, and strong performance comes from having meticulous control over the right levers. Without this level of control, you’re flying blind and results will suffer. You’ll lose sales to your competitors.

However, if you’re not an advanced advertiser and don’t have a whole lot of experience running campaigns, Smart Shopping could be your best option, it can’t hurt to test. Trial-and-error is a necessary evil. Or, at least a necessary headache. Sometimes just showing up is enough to get the job done until you’re ready to step it up.

If you’re looking for an easy way to run Google Shopping, we recommend trying your hand at Smart Shopping campaigns. If, on the other hand, you find the above daunting, or you want to actually scale your business and dominate your competitors on Google, give us a call and we’ll do it for you!

WANT MORE ROI
from your advertising?

Hey, it’s not easy to get a high ROI. Competition for your customers has never been higher. What worked a few months ago no longer works today. Are you leading the charge, or trying to keep up?

GET A NEW STRATEGY

7 Ways To Research & Crush Your Competition in 2020